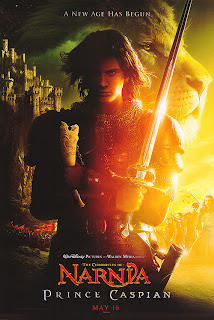 When The Lion, the Witch, and the Wardrobe came out in 2005 (can it have been that long ago already???), I was less than thrilled with the job done on putting one of my very favorite books on film. Still, as a dedicated fan, I felt obligated to check out the next installment in the Chronicles of Narnia: book two (in the correct, original order), Prince Caspian. Prince Caspian is not my favorite book in the series, but still, it's an important part of the whole.

I was very pleasantly surprised. I thought this film was much better than LWW. Actually, I've seen Caspian twice now, with two different sets of family. This movie takes more liberties with the book than did LWW, but I think the choices pay off and make sense in transitioning the book to the screen.

Acting wise, standouts include Peter Dinklage, (he was especially good, and I wish I'd seen him in more things) playing Trumpkin, Skandar Keynes, playing Edmund, and Anna Popplewell, playing Susan. Actually, all four of the children seem to growing into their acting roles, and Ben Barnes, as Prince Caspian, rounds out the group of young actors nicely.

Overall, the film was much darker then LWW. This is somewhat because of the story, but also because of how this film was written and directed. I liked the darker quality - it made the story seem more real, if that's a legitimate statement about a fantasy film. The crises seemed more urgent, the danger seemed more present, the character changes seemed more complete. The internal struggles were clearly communicated. I also thought that the make-up and costumes and effects were stronger in this film - that was a real complaint of mine in LWW. This time around, the centaurs, the minotaurs, the fauns, they all looked more 'realistic.'

Spiritually speaking, this film focused (less overtly probably than LWW) on faith/doubt themes, growing in your discipleship, temptation, moving on and letting go. In hand with reading the book, (which of course, is still better), watching this film with church folks should provide for good conversation. Also check out Eric Helm's thoughtful reflections on the movie. Updated: Forgot to also link to this excellent post by slavktivist about Caspian.

Next up in the series comes one of my favorites, The Voyage of the Dawn Treader. I hope the producers and director continue with the same tone and quality.

Asha BG said…
Hey thank you so much for writting the review. I have been waiting for Prince Caspian ever since The lion, the witch and the wardrobe, one of my favorite movies!!
My inclination towards the movie has increased even more.
Can't wait any longer.
8:53 PM

Eric Helms said…
I look forward to the voyage also--If I remember correctly that includes one of my favorite scenes and images of baptism. I am glad you enjoyed the movie. Everyone I know who has seen both likes Caspian better! If the trend continues, I might even enjoy the magicians nephew (not a favorite of mine). Thanks for the reference.
9:32 PM

Greg Hazelrig said…
I'm looking forward to seeing this and the new Indiana Jones movie this weekend. That will be our Memorial Day treat.
12:20 AM

Anonymous said…
haven’t seen Prince Caspian yet but definitely looking forward to it… i’ll have to look over the book one more time just to remind myself how the original story goes
6:53 PM