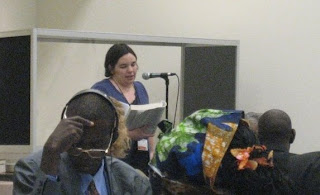 When I was a lay delegate to General Conference in 2000, I chose to be on the Faith and Order legislative committee. Which paragraphs of the Discipline are covered by what legislative committee changes somewhat every four years, and in 2000, Faith and Order dealt with nearly all the petitions relating to human sexuality. I wanted to be right in thick of it, and I didn't want to miss any part of the conversation.

Eight years later, things have changed. Oh, I still like being in the thick of it sometimes, and it was still a little hard not to be in the legislative committee working on those issues, but now after being on the board at GBCS for eight years, I've developed some real passion (and hopefully even some real knowledge) for the social justice issues we are so engaged in as a church.

In my subcommittee in particular, we dealt with petitions ranging from science and evolution, to global warming, to the privatization of water. Because we worked really hard and got done before some other groups, we also ended up handling some petitions that War and Peace did not get to - so we also ended up discussing some Israel/Palestine issues, which, for me, was out of my comfort/knowledge zone.

Many of the petitions we worked on were petitions submitted by GBCS that had already come through the Environmental/Economic Justice work area on which I serve. These petitions are mostly what I would call key policy statements, like our Energy Policy, or our statement on Environmental Racism.

Some petitions were focused on amending the Social Principles - by updating language to be more current and accurate, by addressing needs that have recently developed (like the emerging need to speak to water privatization), etc. We worked quite a bit on one that petition called to amend our Social Principles statement on Science and Technology. The GC approved language that reads, "We find that science’s descriptions of cosmological, geological, and biological evolution are not in conflict with theology." We are now on the record as United Methodists as saying that science, specifically evolution, is not in conflict with theology. That change certainly was a cause of some conversation and disagreement in our subcommittee, but ultimately, the motion had great support in committee and on the floor and carried. I find that pretty exciting.

Other petitions we worked on were interesting because they pertained to such specific issues that they required a great deal of learning just to be able to act on them sensibly. For example, a petition came about Cypress Mulch harvested from the fragile coastal region of Louisiana. I know nothing about cypress mulch or why it is a problem to use. But I know it was important to the folks who submitted the petition and that they expect us to act knowledgeably one way or another to act on the petition. So, thanks to some resource people (and the power of Google), our subcommittee learned enough to rewrite the petition to address all the concerns raised, and we passed the resolution. We now, as the UMC, are urged to avoid purchasing cypress mulch that is harvested from Louisiana.

We generally seemed to work well together as a whole committee. For example, our statement on Welcoming the Immigrant was a collaboration of the whole subcommittee and other interested delegates. When the subcommittee first presented the petition to the full group, there was some disagreement, and a minority report was going to be filed. But the groups got together, had conversation (late into the night, I understand), and were able to return to us the next day with a revised petition that all were happy with, and the petition then passed I think unanimously out of our committee. Such examples are unfortunately rare overall, but examples where you really feel like holy conferencing is a true possibility.

*photo: me presenting subcommittee legislation to the full committee

Some other GC articles you might find interesting:
A UMNS commentary about time and related issues at GC
UMPortal's coverage of the witness for an inclusive church at GC
UMPortal's list of excerpts from bishops' sermons at GC
"Speak it into Existence," a post by a young clergywoman, about her hope from GC

Jeffrey said…
This comment has been removed by the author.
11:26 AM

Jeffrey said…
Cypress Mulch - Thanks for your work on the cypress mulch issue. I noticed however that it was just Louisiana that was targeted in your resolution. As logging pressure is removed from Louisiana it is shifting back to Florida who is in just as great a risk.

The best advice is to just never use cypress mulch. There are many alternatives out there that are known to be sustainable. Because in this cause the logging industry seems to know know bounds when it comes to destruction of our last remaining wild places no matter what common sense might say.

Of course visitors can visit http://SaveOurCypress.org for the latest info.
11:29 AM