Review: The Ethics of What We Eat: Why Our Food Choices Matter by Peter Singer and Jim Mason 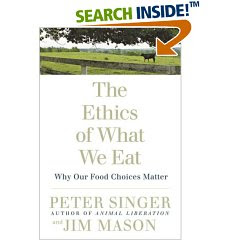 I just finished reading The Ethics of What We Eat: Why Our Food Choices Matter, a new (2006) book by Peter Singer and Jim Mason (published also as The Way We Eat), which I picked up after my brother recommended it last year.

The Ethics of What We Eat follows three couples as they make choices about what to eat: Jake and Lee, who eat "the standard American diet," Jim and Mary Ann, who are what the authors describe as "conscientious omnivores," and JoAnn and Joe, vegans. The authors visit the homes of these three families, go food shopping with them, ask them about the food choices they have made, and the reasoning behind the food choices, and then try to track down the 'story' of the food purchased - where did it come from? How was it made?

The book is really excellent on many levels. First of all, the style of the book, following the three families, makes for a very personal, readable, 'real' book. The book is about 300 pages long, but I read it more quickly than the 100 page book I was reading at the same time because it was simply enjoyable and read like a story.

Second, the information is compelling. Obviously, what we eat and how we justify what we eat is a topic that can generate a great deal of disagreement, but I found the authors' arguments to be very persuasive. I found this particularly to be the case because they didn't always give the answer I expected. Vegetarians and vegans will often throw out a lot of 'reasons' why one shouldn't eat meat. Singer and Mason, who are huge animal rights activists, don't just support all of these reasons. Some of them they examine and find to be false and unsubstantiated. But they validate other reasons and add concerns I hadn't thought about.

Third, I think the books is accessible. Peter Singer, who I've written about before, is pretty 'hardcore' in his ethical writing, and very 'no-nonsense', straightforward in his style. He can be a lot to take. Not that I disagree with him, but I think he has a reputation of setting a standard higher than anyone can reach, which can be discouraging. But in this book, I think he and Mason speak to a wider audience. They certainly reach a conclusion of a high ideal, but they pointedly state that their goal is not to make ethical eating seem so impossible that no one thinks it is worth trying. I think they succeed in making steps toward ethical eating seem well within everyone's ability.

There is so much information in this book I can hardly think of how to share it in a blog post. Really, I just want to convince you to read this book, which is so much more articulate than I am on the topic. But here are some themes/concerns raise by Singer and Mason:

* Transparency - Mason and Singer have a hard time getting most people in the factory farming world to speak to them. Wal-Mart and Trader Joe's, stores they go to with their 'couples', won't let them film or record audio inside the store. When they try to hunt down where chicken or fish or other meat products sold at a store come from, they simply can't always find the information (no one they talk to seems to know) or people refuse to talk to them. In the first pages, the authors quote Lord Acton, "Everything secret degenerates . . . nothing is safe that does not show how it can bear discussion and publicity." (12) They also address deceptive labeling, like in eggs that might be labeled "all-natural" or "cage free" and what those labels really mean. Do you know where the food you eat comes from, really?

* Hidden costs - The authors address the idea that eating ethically costs more than eating conveniently. Indeed, I've often hesitated over buying something I know is more ethically produced because of the cost. $6 for a gallon of milk that is organic instead of $3.50. One purchase at a time it may not seem like much, but buying intentionally can be pricey. Mason and Singer address hidden costs, though, that make our food appear to be relatively cheap. They highlight, for example, people living near Tyson chicken farms, who are quoted saying, "Since Tyson took over the operation . . . there is a very offensive odor that at times has taken my breath . . ." and "My family lives next to the chicken houses. We caught 80 mice in two days in our home. The smell is nauseating . . . we went to the doctor and my son had parasite in his intestines." (30) The authors highlight decreases in bio-diversity, extinct species in marine life, water 'dead zones' where nothing can live because of water pollution from factory farms. All of these things add up to a very costly industry in order to produce cheap food. We may not be paying the costs when we shop at Wal-Mart. But someone is paying a high price for our cheap food.

* Animal Rights and Human Rights - The scenarios that Singer and Mason describe, the descriptions they give of how animals are treated on factory farms are vivid and horrific. 'Animal rights' per se is not why I became a vegetarian originally, but some of these descriptions really brought tears to my eyes. As a person of faith, I'm not sure how I can justify having another living thing so treated simply so I can eat food, when I have so many other sources of food available to me. But what I like about this book that if you can't be moved by an argument for animal rights, Singer and Mason highlight enough human rights issues that you should/could be sufficiently convinced to eat more ethically. You might be interested in health issues, like the ways in which the poor treatment of animals during their lifetime is passed on to us in our food, or labor issues, like how our consumer demand for cheap food means oppression of farm laborers, or environmental issues, like how our use of land, water, and energy to produce meat is devastating to the ecosystem. Even if from one angle you aren't interested in changing what you eat, Mason and Singer ask you to look at the issues from yet another angle.

***
I found this book to be extremely powerful. I've certainly been taking a hard look at my own food choices as a result of reading this book. Some of you know that I tried going vegan a couple years ago, only to 'fall off the wagon.' I've been thinking for a long time about trying again, and reading this book has certainly again nudged me in that direction.

Anonymous said…
This is probably the best book I've read on the topic, in large part, I think, because it doesn't come across as judgmental. They portray all the families in the book in a very positive light. None of the families are "bad guys," none of them are just lazy and self-absorbed.

You might also like "Dominion," by Matthew Scully. There were sections that I had a hard time with (his very intense anti-Singer stance, mostly), but overall it's a terrific pro-vegan book written from a conservative, Republican Christian stance (he was a speech writer for Bush, came up with that whole "axis of evil" thing, I guess).
9:12 PM

RevRichelle said…
Just bought the book on Amazon. Can't wait to read it. Thanks for the review. I remember reading some of Singer's writings in seminary for our ethics class. Hope all is well in NJ. Happy Advent.
8:01 AM