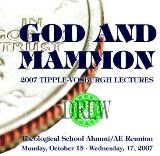 I just spent the last three days at Drew Theological School's annual Tipple-Vosburgh lectures. This year the theme was God and Mammon, which sounded particularly interesting to me. I was also eager to attend this year and reconnect with friends and faculty now that I am back in the New Jersey area. These first two months in my new appointment have been so chaotic I haven't really taken the time to get in touch with my friends in the area yet.

Here are my (mostly unedited) notes from day one of the lectures:

John McCullough, Executive Director and CEO of Church World Service
Theology of : International Development in an Increasingly Complex WorldMyanmar/Burma – rejection of 1990 elections, placing of leader under house arrest, 1989-present. 100,000 refugees in , although doesn’t recognize their status. Only can enter to flee active fighting. Camps close to border. Restricting role of UN on refugees. Etc. 450,000 internally displaced persons. One of 50 poorest countries in the world.Aim of Church World Service is Empowerment. To help people gain capacity to improve their lives and livelihood.Chronic – conditions leading to poverty
Crises – responses to disaster/human conflict
Partnership – especially with most vulnerable

The church has an obligation to respond to situations of human crisis around the world. Matthew 25. CWS mission focus.What does God expect of us, and what is our response? Micah 6:8 Words alone do not suffice.

Reality: Rising food costs – 21% more at wholesale level than 2005 (some grains more than 30%) – harder for aid organizations to finance. Stretched thin. Quality and quantity of food at risk. 30,000 children die quietly each day from poverty. Invisible in death. ½ the world lives on less than $2/day. Children are largest group living in extreme poverty.The facts don’t lie, and we shouldn’t waste time questioning the validity of them. Shouldn’t we take responsibility?

Eradicate conditions that demoralize human development.
Long and healthy life.
Knowledge.
Decent standard of living.
Entitlements for which we must be advocates.

Responsive Labor, a theology of work.

In ordinary is holy in Christian life. Body, bath, meal, labor. Central to faith. Our daily work matters as a response to God. God at work for the world, before we work. We work as a form of thanksgiving, because God is at work. God’s work proceeds from abundance. God works so that all might have abundant life. Always enough work and always enough fruit of labor to go around.

Problematic Assumptions of Work in US economy:

Scarcity. Never enough to go around. I must work all I can to hang on to what I’ve got and accumulate more. Something we hoard to ourselves. Not enough time, money, things.

Joblessness is something to be expected. Some unemployment means a healthy economy. Drives economic engine. Unemployment around 5%. ‘Natural rate’. Times are ‘good’. Unacceptable numbers underneath: Af-Am unemployment rates are double, youngest Af-Ams are quadruple. Numbers only include actively seeking. Otherwise, off the radar. Don’t even count. We assume it is ok for some who want work to be denied it.

If you are working, you will earn enough to make ends meet. But those who work the hardest often work below the poverty line. Near 31% live at or near poverty levels. Women Head of Household are 2x likely to be working poor. Purchasing power of min. wage has declined. Average CEO earns 300x much as min wage worker. Never have enough. Working poor work multiple jobs. Middle class work more just because we want more. Productivity has doubled since middle of 20th century. We could work ½ the amount for same standard of living as 1950s…We need bigger homes, 2 cars, gadgetry. Out paces all but 2 nations in time on the job. and are only two higher.

Time-starved. Little time to rest. We sleep less. Mothers working outside home talk about sleep like starving people talk about food. “Merely showing up for a paycheck."

What do we bring as a Eucharistic People – Time, Things, and Gift:

1) Reorienting our Time. Not as an escape from work week, but as our work begins. Always enough time. Rids us of illusion that time is something we can control. Words of institution – we remember a distant time and our time. Time is not a demand on us, but given as a gift – is God’s time. (My note: Irony – woman answering cell phone during lecture) Does my work encourage me to see others as constraints on my time?

2) Our things. Eucharistic is materialistic – reminds us that God blesses the material work of our hands. Countless hours in bread and wine. Represent a life lived gently on the land. Our offering becomes God’s gift to us. Unimagined abundance when work is shared. Food of Eucharist is public. Without giving and sharing – meal devolves into gluttony (early church example.) People die because of hoarded work and bread. We go away full and we go away hungry. But from the Lord’s Table, we hunger for righteousness and justice. Mix of hunger and satisfaction. Hunger for God’s reign to come, satisfied because it is already here.

3) Gift. We don’t expect gifts, can’t receive them. Good life comes only to those who deserve it by working hard enough. Giving doesn’t happen. Hard work should reap own rewards. In scarcity, we have idea that we must repay the giver to stay out of their debt. Is just like barter, exchange, etc. But Eucharistic economy, gifts are gifts! Evokes our response. Ceaseless giving, not just an exchange of economies. Christ is the offering and the offerer. Divine giving subverts tit-for-tat assumptions. We give not to be out of debt to giver, but in response to God’s fullness, giving what we have already been given. Coming to table hungry, we leave hungry for the poor.

Scripture as a narrative of desire – God’s desire to establish relationship with us. God restlessly desiring us, to establish justice and peace among us.

Mainstream/orthodox approaches. Bad economics – to question the desire for economic growth – heresy. “To think like an economist” is to think like a mainstream economist. Divestment. Global warming. Globalization. Consumerism.

People seen as maximizing individual happiness. Greed important to function of economy. Not always maximum financial returns. Economic analysis does not in itself determine best choices.

Global-warming reduction as investment. We should spend little now, grow economy, and spend later in a bigger way. Economics: future benefits are worth less today than other benefits. Presumes that we who live today are separate from those who live in the future. from them.

More you study economics, less likely to give to charities.

Globalization. Not free or fair trade, but negotiated trade, negotiated by the rich nations. Whoever has the most gold makes the rules. Trade barriers – nations not allowed to ban imports because of human rights violations, like child labor, slave labor, etc. When things grow, they get bigger. Growing the economy shrinks the ecosystem. Growth undermines the resources necessary for further growth. Growth + environment does not = sustainability. To a point, more is better. But eventually, more isn’t better. It’s just more.

Unwilling to differentiate between needs and wants. Advertising to create dissatisfaction. Consumer pleasure with products is meant to be transient. Impermanent. “When basic needs are met, human development is more about being than having.”

Energy inflation à water/food price inflation. Now, 11% on food. Way we produce food uses huge amounts of energy. What should we do?

How to go back, since we’re used to all these things? Use more things in common. Vision/will. “can’t break up with my boyfriend because I have too much invested.” We have to break away.

Impulse to bigness. Things are (globalization) so far away that we can’t care about them.

My reflections: Of all the lectures on this day, I actually enjoyed the one with the economist the most. He gave an interesting perspective, and he talked about how outside the norm it is among economists to have this non-orthodox view - to be an environmental economist, an economist emphasizing sustainability.