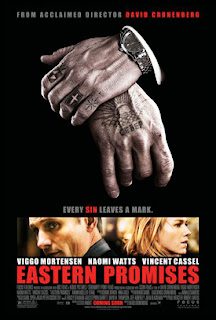 This past weekend I went to see David Cronenberg's new film, Eastern Promises. I knew this film was supposed to be very graphic and violent, but I'm a fan of Viggo Mortensen and really wanted to see the film. I really liked A History of Violence, and figured another Cronenberg/Mortensen combination would be a good match, and the film has already been getting a lot of Oscar buzz (which sometimes means something...)

The film centers around Anna, a mid-wife, played by Naomi Watts. She delivers the baby of a Russian girl, 14, who dies in childbirth. Anna, for reasons made clear in the film, can't let go until she finds the girl's (and baby's) family. She has the girl's diary, and seeks to follow the clues in it. Her quest leads her right into the Russian mafia, including twinkling-eyed Semyon Armin Mueller-Stahl, his son Kirill (Vincent Cassel), and Kirill's friend/'driver', Nikolai, played by Mortensen.

The film is certainly graphic and violent as promised. But the images aren't gratuitous as they are in so many popular movies. The tagline of this film is "Every Sin Leaves a Mark," and that's a good theme to focus on in this movie. Actions and consequences. A seemingly never ending cycle, an unbreakable cycle of this life that is killing, body and soul, so many people in the story. Motivations - why are the people in the film making the choices they are? What leads Anna on her quest for justice in this case? Why do those caught up in the mafia do what they do? How did they get into the life they're in? Why?

I don't want to say too much more about the plot details, because it would really detract from your being able to enjoy the movie yourself. But I definitely recommend it!