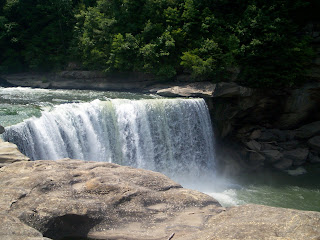 I got back Friday night from my week at Red Bird Mission in Beverly, Kentucky. This was my second trip to Red Bird - I went in 2004 with my church as well. St. Paul's has had a team going to Red Bird for fifteen or so years, and the trip is pretty well supported by the whole congregation. We run a little league concession stand all spring and summer, which mostly pays for the trip. Participants really only need to 1) work at the stand and 2) bring some spending money for the meals there and back and on the 'day off'. This makes the trip an option for everyone - the team strives not to have cost be an issue for anyone.

This time around, I wasn't able to go to the work site with the rest of the team, since I'm still recovering from my ankle surgery, and gimping around with a cane. I worked in the Community Store instead, which sells used and donated items at reduced cost. The store is quite an operation. I worked behind the scenes, where all the preparing of items takes place. Nothing is wasted. Everything is used somehow, if it all possible. Items in the store are rotated every two weeks! I enjoyed getting to know this other side of Red Bird. I did feel frustrated and not particularly useful, but the nice thing about Red Bird is that they really do try to find a place for volunteers of all kinds.

The heat in Kentucky this week was pretty oppressive. The heat index kept us at about 105 or 106 most days. Here I was lucky, since I spent most of my day in an air-conditioned building. The Red Bird staff clearly worried about so many (mostly very young) volunteers out in the heat all day. The humidity was such that the floors were actually sweating (my cane was sliding all over the place). I thanked God seriously many times for air-conditioning in the sleeping cabins. I can't imagine surviving the week otherwise.

The Fire Department at Red Bird serves ice cream once or twice a week, a dollar a scoop. The sign indicated Tuesday was an ice cream day, but apparently that was a mix-up. So about 75 of us were waiting for ice cream on Tuesday, when it became apparent no one was coming. Finally, one of the firefighters drove in, just to pick up something from the station. He had no plans of serving ice cream. But seeing so many of us there, he had pity on us, and scooped up what ice cream was already in the freezer. I think if he hadn't, there was a serious chance of a riot taking place.

This area of Kentucky is beautiful. Wednesday is a day off for all the work teams to enjoy the area. We went to Cumberland Falls State Park. We drove through the mountains, and looked at all the coal mining operations. The miners trapped in Utah was clearly on the hearts of the people I met in the Community Store - they are mostly spouses or family members of miners, and I'm sure a dread of experiencing the same kind of accident is always with them.

gavin richardson said…
our church does work with red bird as well. which is attended by one of our pastors who is a vegetarian as well.. i've often joked that she fasts on trips like this because kentucky doesn't know how to cook without meat. &:~)
12:12 PM