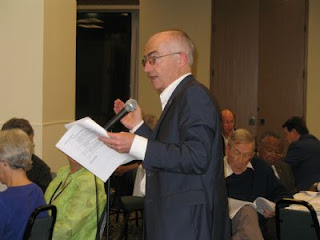 Some excerpts from the article -

"'We believe God needs a church that is more fully ready for worldwide mission and ministry,' [Bishop Ann] Sherer said. The proposed changes would equip the church 'to do the mission in ministry to which God calls us,' she said.

. . . Legislation being forwarded to the 2008 General Conference requests the task force and the Connectional Table to jointly continue their study of the church's worldwide nature and report to the 2012 legislative assembly on the church's characteristics and how the United States could become a regional conference while retaining its current jurisdictional composition.

Bishop Patrick Streiff of the Central and Southern Europe Area said the proposal to make the United States a regional conference 'gives possibility to separate U.S. business from the church worldwide' at General Conference. 'Part of the church outside the U.S. is 30 percent, and it is just not possible to continue General Conference as we have.'

The report, which urges Christians to be 'a counter culture,' says that the U.S. influence in churchwide governance, as evident in the Book of Resolutions, is damaging to the church both inside and outside the United States. 'It disempowers central conferences from being fully actualized within the body and allows the church in the United States to escape responsibility from dealing with its internal issues.'

The proposal does not change the number, purpose and function of jurisdictional conferences; the way bishops are elected or assigned; the purpose or mission of any churchwide agency; the size or power of General Conference; the way the Social Principles are decided upon or amended; or the apportionment formulas and allocations, [Bishop Scott] Jones said."

If you attended General Conference in 2000, you might remember the Connectional Process Team report (CPT), which made, in part, a similar proposal to make the US a regional conference. The report was basically stripped of any legislative power at GC 2000, and then passed through just with the vague recommendations about the future direction of the church. I remember feeling at the time that the CPT report was asking too much too dramatic change, and I was not in favor of it. But seven years later, I read this article and think that the US becoming a regional conference is exactly what we need to do.

The article mentions the Book of Resolutions and the US-centric nature of the resolutions. This is something that we've struggled with both in the Book of Resolutions Task Force and at General Board of Church and Society meetings. At GBCS meetings, we talk about the US-centric nature of the resolutions, and in the past few years in particular, we've tried to be more careful about how we write resolutions. If a resolution is really meant to be for United Methodists across the globe, we take out US-specific language. But of course, all resolutions can't be stripped of US language, since some of them deal with things specific to this country, just as some deal with issues specific to other countries. The issue is the balance - country specific resolutions are OK, but the vast majority are US-specific.

What to do? Water down resolutions and take specificity out of them? Images of my college Greek professor Dr. Lateiner spring to mind - he actually had a stamper with big red lettering - BE SPECIFIC!

Couple these issues with the growing church outside of the US, and with issues being raised about General Conference membership and how new countries bring their churches into the UMC fold, and I think you've got some strong motivation for making these changes. What's more, isn't it simply fair? Ethical? How can we be a global church if one country is clearly in control? This is a power issue. Are we in the US willing to share power? If not, why not? What do you think? What are the ups and downs and rights and wrongs of the US becoming a regional conference?

*Image: Bishop Patrick Streiff, of the Central and Southern Europe Area, asks a question about the Global Nature of the Church report. The report proposes four changes to the United Methodist constitution that would pave the way for the church in the United States to be a regional body, on par with the Central Conferences outside the United States. The report was discussed during the Council of Bishops meeting April 29-May 4 in Springmaid Beach, S.C. A UMNS photo by Linda Green. Photo # 070476. Accompanies UMNS story #242. 5/10/07.