As I mentioned, I arrived a bit late and frazzled to the Festival of Homiletics because of the arrival of my nephew Sam on Monday. (Not that I'm complaining - and here's another fabulous picture of him, by the way.) I missed both Barbara Brown Taylor and Walter Brueggemann, among others, which was too bad - I've heard Barbara Brown Taylor - back in 2001 at a gathering of ministry fellows through The Fund for Theological Education (where I also heard Fred Craddock). I've only read Brueggemann. Oh well.

The first thing I was in time to hear? A concert given by four singer/songwriters. I hadn't heard of any of them, and that's because they are primarily successful as songwriters - those who crafted the tunes that we know and love for other artists. We heard Marcus Hummon, Allen Shamblin, Kyle Matthews, and Beth Nielsen Chapman. Hummon, for example, wrote "God Bless the Broken Road," also "Ready to Run" for the Dixie Chicks, and Shamblin wrote one of my favorite songs ever, Bonnie Raitt's "I Can't Make You Love Me."

What a perfect first event to attend. The music was so excellent, moving, relaxing, mellowing, reflective. I really enjoyed it. I enjoyed hearing about the writing process, the courage it took for them to move to Nashville to pursue their dreams, what it is like to have others sings your songs and be famous for them. I enjoyed the way they seemed to respect each other, and how they worked together and improvised with each other. They shared how they saw their faith expressed in their music - sermons in words. Hummon is married to a clergywoman, and I especially like this song of his, "Stand Up (Song for Jesus)":

You’re battered and blue
He drinks and you pray
You cringe in the corner
But you're still in his way
You oughtta run like hell
But you always stay...
Stand up Stand up
You're out on the street
And you're only fifteen
You oughtta be dancin'
Bright homecoming queen
But you sleep in the alley
And you cry in your dreams...
Stand up Stand up
You learn to speak English
So you can explain
That you need the job
For the money to pay
To bring a hungry family
'Cross the border someday
To this town and these streets
That your ancestors paved, Oh...
Stand up Stand up
Now, I know a poor man
from an occupied nation
He was trained as a carpenter
But he lost all his patience for it
He believed that the truth
Was the chosen vocation
Still they hung him like a criminal
Despite the adoration
Of the invisible masses
Who forgetting their station
Believed in a God
Who loves all creation...
Stand up Stand up...

I had a great week in Nashville - I have many more sets of reflections to come. But I also just enjoyed being in Nashville. I've been to Nashville for meetings before, but this was the first time I actually got to just be in Nashville and walk around and see things. I really got a better sense for the community of artists and musicians struggling and/or succeeding in the industry. I like the city. Still couldn't ever see myself living in the South, but maybe if I did, it would be in Nashville.

OK - and one (two!) more picture(s) of Sam (with me, self-portrait, courtesy my cell phone). 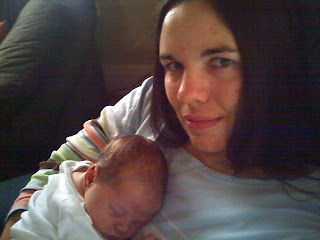 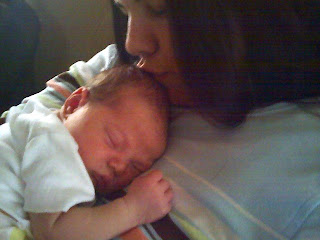 Anonymous said…
So, have you bonded to that child yet?
8:11 PM