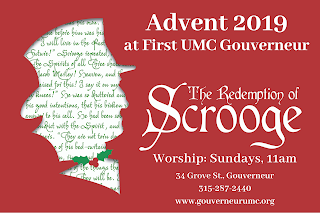 The Life of Christmas Present


Sometimes, like Scrooge, we’re so focused on holding tight to what we have, trying to create an abundance for ourselves, that we don’t realize and don’t have room in our lives to receive what God has already given us: God’s self, God’s love, God’s grace, God’s mercy and forgiveness. We can’t claim those gifts if we’re too busy trying to make sure we have enough of everything else. Jesus helps us make room, asking us to find a place in our hearts for a tiny babe in a manger - a small thing that will fill our hearts and lives completely. And when we let Jesus make room in our hearts and lives, when we embrace God’s abundance, God opens our eyes to the people around us with whom we can share our abundance without anxiety, without fear we’ll run out. We have to wait till the rest of our journey with Scrooge to find out how he opens his eyes to a new kind of abundance, but thankfully, we don’t have to wait to start seeing things differently ourselves. Even as we wait to welcome Christ again this Christmas, he’s already with us, ready to fill our hearts and lives and world. Thanks be to God. Amen.

david said…
Hi Beth, I am also a UM pastor writing my Advent series on Scrooge's ghostly visitors. I am enjoying seeing the similarities and differences on our "take on Scrooge". Keep up the good work!
10:36 AM