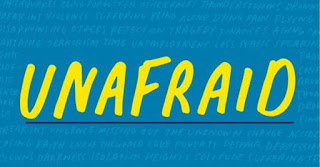 
We may fail. We’ve done it before. Probably, we’ll do it again. But we can be strong and courageous, because God’s love never fails. And God is with us wherever we go, choosing us, always. Amen.

Anonymous said…
FDR had it close. “We have nothing to fear but fear itself,” has much truth, but isn’t the Truth. We can (will) be/get hurt, but when we rest in Jesus, the deeper magic of which Lewis speaks becomes transformative, bringing life where there seems only death or decay. When I realize this, when I hold tightly to this Truth ... no matter what ... the Truth of the ultimate reality of my knowing, at the deepest part of all I am, how loved I am by the Creator of all that is, was, and ever will be, and from whom I have come, in whom I live and whence I will forever have my being ... the control my fears have over me loses power. I really can, “do all things through Christ who strengthens me.” Pretty catchy phrase, eh?
I think the introvert/extrovert labels are way overstated. I think the spectrum of “I’ve got to get this right every time” (I don’t know of some terse term for that; maybe ‘perfectionism’) vs. “let’s give it a try ... it just might work” is more central to how we make decisions in our lives. From one ‘far-ended-on-the-scale’ to another. All the best in our Jesus. Keep slugging.
Don