I went straight from the Festival of Homiletics to Annual Conference, more or less, but I've been meaning to share some of my notes from our time in Washington, DC. This was my fifth time at the Festival. It's always excellent, and this time felt like it was just peak after peak. It was so good that it was mentally exhausting!

I'm going to try to recap some themes from the speakers I found very compelling, starting with Richard Rohr. He lectured on the first night, and then gave a sermon later in the week.

When he teaches contemplation, Rohr says that he teaches that these kinds of questions, these dualistic questions represent the "lowest level of thinking." "You have to catch yourself," he said, "from identifying with one side and damning the other as if that’s smart, as if that’s wisdom. As if this mystery we’re trying to complain could ever be so limited."

He used the image of a tricycle, giving a nod to Wesleyans and our quadrilateral, to think about how we make decisions. His tricycle is the quadrilateral but without reason, he said, which we've "overbalanced" on, letting it always win out, always trying to prove a side. The front wheel is experience.

He spoke about Catholics "overplaying the tradition card" and learning to teach not "little t" tradition, but "perennial tradition." "If it is true, has to be true everywhere all the time, and keep showing up in every age." Our job as preachers and theologians, he said, is to connect the dots, how it (truth) keeps appearing in every saint, in every scripture, in every tradition.

"Scripture is as good a place to start as any," he said, as we look for truth, but "If God’s self-revelation depended on the printing press … we’ve got a vacant, empty universe that’s bereft of God.”

We individually did/do not have to get it (life/truth/God) right, Rohr argued. The only righteousness is in the communion of saints. "That’s what we mean by tradition."

Experience always rules really, he said. Paul and Jesus both trusted their own experience against their traditions. When push comes to shove, "we think like our experience has taught us." We have available to us valuable tools to be able to critique our own experience. If our tools aren’t doing that, they aren’t gifts of God. 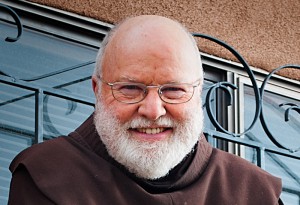 Rohr asked, "Why did Jesus tell the bad spirits not to talk about him? Because evil people know what is at stake sometimes more than good people – they know where the power is at, and they want it."

Good people can be very naïve about power, Rohr said. So Jesus can’t risk letting his good message be spread by evil people. Jesus can’t risk power people, who are entirely self-referential to be his witnesses.

Rohr spoke about the psychology of evil. In Catholic theology, "old school", there are three sources of evil: the world, the flesh, and the devil in that order. But Catholic theology concentrated too much on flesh, the individualized notion of evil. Sometimes, Rohr argued, evil needs to be personified (devil) or you don’t take it, the mystery of evil, seriously.

Rohr says that we've "affirmed all seven [deadly] sins at corporate level." But that won’t work because something can’t be ‘ok’ at corporate level and not at individual level. Our present Christian morality is inept in this way. We try to shame you at flesh level, and we are conflicted, Rohr said. But, "We’re promoted for worshiping the system."

Anything that is "too big to fail," beyond criticism, anything "that is above question" is open to being demonic.

Rohr's Old Testament professor taught that there was only one sin: idolatry - to be "on bended knee before anything other than God." Jesus invites people away first from family and job - things we like to put before God.

Rohr reminded us: We’re saved by faith! The biggest heresy is that we turn the biblical notion of faith (which is knowing/not-knowing) into a need for certitude – we made certitude into an idol. We see it in our political discourse.

Of course, my notes don't capture the fullness or power of the lecture or sermon, but I found Rohr to be incredibly compelling. He's a prolific author, so if you want to investigate, check out one of his many books. I left the Festival with one myself, thanks to a gift from my roommates on the trip!