Review: Stephenie Meyer, The Twilight series, the movie, and The Host 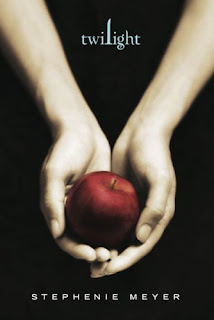 I'm not ashamed to admit that I recently read (and, ok, reread right away) the Twilight series by Stephenie Meyer, a set of four books about Bella, a young girl who moves into a new town and falls in love with Edward, who happens to be a vampire. Some of my CCYMers had been reading the books and buzzing about them, and I was looking for something light. I picked up the first book, Twilight, and was hooked. And then I found out that a lot of people my ages (especially mothers of teenage girls) had read the books too, and loved them. And then I made my brother read them, so that I could make him go to the movie with me. And even my brother really liked them, although I think he and I appreciated the books in different ways!

The books have been criticized by some as being anti-feminist, like this article which seems most ridiculous, where the author actually calls Edward a proto-rapist. (Was she reading a different book than I was?) I can understand where the critique is coming from to an extent, but mostly I think it is off target. Have none of these critics ever been in high-school? Bella certainly has low self-esteem. Edward is constantly telling her she doesn't see herself accurately. And despite the whole vampire thing, her struggle to see herself as worth being loved seems pretty realistic to me.

The movie . . . was terrible. There was hardly anything about the movie that I didn't think was pretty bad. The movie was made, I think, for a younger, denser audience than it should have been. Everything was spelled out in an over-the-top way, as if audiences could never pick up on subtle things. Edward doesn't just glare at Bella like he does in the book, he makes a face like he's smelled something really foul, and everyone in the audience laughed hysterically. In the book, it's not a funny scene. That's how you know the movie is so bad: everyone is laughing loudly at things that weren't meant to be funny. I liked the casting, it had a lot of potential with the people involved, but I for one am glad that a new director is coming on for the second film, New Moon. Hopefully he will give the film a darker, more serious edge.

Finally, I want to mention Meyer's one non-Twlight book, The Host. This is a sci-fi-esque book (sci-fi for people who don't like sci-fi, she says) that's for older reader. I listened to it on audio book, and thought it was great - in some ways, better than the Twlight books, without all the drama and energy of being caught up in the momentum of the Twilight books. The book is narrated by Wanderer, an alien who is inside a human host named Melanie. Don't let that description turn you off - the book is really excellent, detailed, with a rich plot, and beautiful storytelling. What I like about Meyer's plots in all her books is that she doesn't always go with the typical, expected outcome. All through The Host, I thought we were being walked into a certain scenario which I was dreading as overdone, but she went an entirely different direction. I'll definitely pick up anything else she comes out with.

Anonymous said…
i don't understand what is the appeal of Robert Pattinson (Edward), his nose looks funny to me
4:13 PM