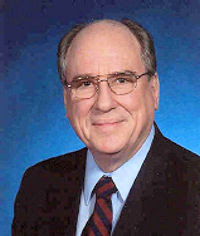 In mid-October, I attended the Bishop's Convocation in my home conference, North Central New York. Our speaker was David Lowes Watson, a retired clergy person, seminary professor, and a Wesley/Methodism scholar. I really enjoyed the event (I always enjoy time with my colleagues), and I particularly enjoyed Watson's presentation. He was funny (frequently using the words 'naughty' and 'twit' to describe people in his stories) and smart, and had all of us, I think, pondering the role of the pastor and how it has changed, and what it should be.

Watson talked about the contemporary heresy: We try to isolate God in the instant present. (Think of a digital watch - it gives you only the instant time, with no sense of time before and time after.) We've "so personalized our discipleship that we've made God something that depends on us," he said. We're anthropocentric, and consumeristic. And church in a consumeristic culture is "almost lethal." Democratizing of the church has resulted in people determining the gospel.

He talked a lot about salvation, starting with Oswald Chambers' statement that we are "condemend to be saved." Watson talked about not universal salvation, exactly, but the idea that salvation, who is and who isn't saved, just isn't our business. That's not our task. Our task is preaching the good news. End story. He described salvation as "giving up your resistance to God." Discipleship, though, can't be the "door to salvation" without resulting in keeping people out. "If there is one empty place at the heavenly table, there will be a terrible silence." He defined hell as "the place where mysteries (ie pain, evil, injustice) are currently on hold." "We are born into a world that is being saved whether we like it or not. So we must either accept or reject [being saved.] The real miracle is that God finds us even mildly interesting."

Speaking more specifically on the role of the pastor, he said that we have to be realistic: not everyone will become a disciple. Not everyone in our congregation will be a disciple not matter what we do. He urged pastors, then, to spend more time with those who will be disciples. This was a matter of some debate around our tables, but I think I understand his point. "Our task is not to bring in the kingdom, but to announce it," he said. We are "journalists of the gospel." Great image.

Disciple-making, he said, is really the work of the laity, which we (pastors) protect them from and take away from laity. He talked about circuit riders and class leaders in early Methodism, and noted that the clergy person preached the gospel and administered sacraments, while it was the class leaders and other lay leaders who were responsible for the day-to-day discipleship and pastoral care. We've mixed up our roles and put too much on the clergy, without respecting the laity enough to give them responsibility, and so everythings suffers as a result. Clergy: called to preach the gospel. Laity: called to lead church in discipleship. Pastors need to pastor. You don't go to the dentist to talk about the weather, but to have your teeth fixed. So people shouldn't expect pastors to talk to them about nothing - but to have them be pastors!

I really appreciated Watson's words about clergy and laity and their roles. What do you think? Do we expect anything of our lay people? Are we trying to be the disciple-makers as well as the gospel-preachers? Should we be, or does that role belong to the laity?

One of my favorite books in preparing for ordination was Pastor, by Bishop Willimon. It was extremely helpful to me in being able to articulate the meaning of ordination. But I remember that the titles of the chapters were all "Pastor as ________." Pastor as priest, interpreter of scripture, preacher, counselor, teacher, evangelist, prophet, leader, character, disciplined Christian.... Can we be all of those things? Should we be? Of course, to a degree, yes. But are their limits on what we're meant to do/be? Where are those boundaries?

I think these questions are so important because, let's face it: clergy are an unhealthy, burned out, and often ineffective lot. Why are there so many ineffective pastors? Why are we so unhealthy? Why do so few survive decades in the ministry? I wonder if part of the problem is that we've lost sight of what we're called to do: preach the good news. Maybe when we start to make that too complicated, we're really just creating a big mess. Thoughts?

Patrick Moore said…
Thank you for sharing this. Everytime I hear or read something by "Doc Watson" I feel reenergized to the pastoral ministry.
12:56 PM