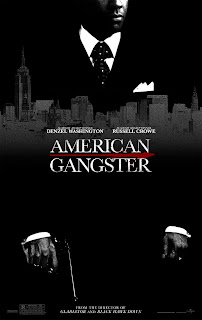 Last weekend my mother and I went to see American Gangster, starring Denzel Washington and Russell Crowe. We made the mistake of going to see it at the theatres at Garden State Plaza, which is a HUGE mall in Northern New Jersey. I've been there before, during the day on a weekday and late at night for an after-store hours movie, but I've never gone on a Saturday at what was apparently the start of the shopping season. It was a zoo, an absolute zoo. But, nevertheless, we made it to the movie, a packed early afternoon showing.

The film is really excellent. I try never to give away major plot points in my reviews, but if you don't want any details, it's probably best to stop reading now. Washington and Crowe are both excellent actors. They're such personalities that they never seem to completely disappear into their parts, but maybe that's something that can't be helped giving their celebrity status. But Washington in particular has such a charisma about him that it is hard to dislike him in any role, whether he plays the 'good guy' or the 'bad guy'.

That charisma is exactly what the film's subject has: Frank Lucas, huge figure in the drug industry in Harlem in the 1970s. Throughout the movie, we see again and again the repugnant, violent, unethical behavior that Lucas displays. And yet, you can't help but be rooting for him a bit. After seeing the movie, I read several interviews and articles about Lucas, and this likability seems to be a common theme - judges who sentenced him, cops who pursued him, journalists who wrote about him - they all seem to end up liking Lucas. Lucas is never particularly contrite about his actions. In fact, he's probably best described as a little wistful about his glory days. He has this charisma.

Charisma is an interesting quality, characteristic, that some people seem to possess, regardless of their moral standing. You don't have to be a 'good' person to be charismatic. Thinking about charisma got me thinking about church leadership and charisma. Are growing churches led by leaders with a certain amount of charisma? I guess that's pretty off topic to the movie review, but my mind always seems to go there! Jesus certainly had a quality of charisma that shines even through texts 2000 years old. He had more than charisma, but he had that too. Have you ever known people you just loved being around, other qualities aside?

The film isn't a 'message' movie - it doesn't paint exact pictures for you of conclusions you should draw, but there are certainly subtle points made - underlying commentary on drugs and their impact, issues of race and racism, the Vietnam war and military personnel. Frank Lucas flew under the radar of law enforcement for so long because no one believed a black man could be in his position of power - do you cheer on the 'achievement' of Lucas, breaking racial barriers of the illegal variety? Questions come up about the military and drug use, and some characters in the movie don't want questions to be asked because of how bad it will make things look, regardless of how things are. These are all quiet themes in the storyline.

Jeff Nelson said…
In your description of Lucas' likability, I was reminded of the article that the movie is based on, where Lucas repeats, "People like the f*ck out of me." And the article's author, Mark Jacobson, admits it!

Look forward to seeing this. Jacobson's book is excellent...not just that article, but the whole thing.
7:45 AM