February 08, 2009
A couple of years ago, I wrote that the hardest thing in ministry was announcing to a congregation that you were moving on to a new appointment. I can now add a little bit to that: it's even harder to do when you're leaving quite a bit sooner than anyone (including yourself) anticipated, and when you have to share that you've requested the move yourself.

Today, it was announced at FLUMC that I will be moving back to the North Central New York Annual Conference, where I have maintained my membership while serving here in New Jersey. This move comes as a result of a lot of struggle, prayer, and discernment on my part. When I came to this appointment, I felt like I was being appointed to just the right place at just the right time, and I certainly don't think I was wrong about that. I've just been surprised to discover that my journey here will be much shorter than I first thought it would be, and that perhaps the plans I've had in mind for myself weren't the things God had planned for me. (Go figure! As a pastor, you'd think this part wouldn't be so surprising all the time....)

I've told folks here what I want to make very clear: my asking to move home is about just that - home and feeling a sense of homesickness for my family and conference. You don't have to know me for long to know that my family is extremely close-knit. For all our different interests and paths, we mostly live close together, and spend a lot of time together. New Jersey and Central New York aren't that far apart, but I very much miss, for example, getting to see my gorgeous nephew all the time: 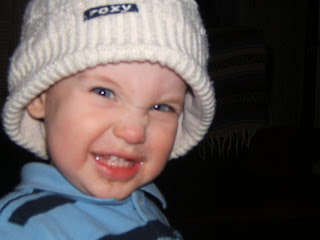 What has been particularly wonderful is the graciousness that people show in the situations when you most need it. I've been dreading making this announcement. I knew it would be shocking to announce a move after just two years of ministry in an appointment. I knew people would be shocked, and expected that some people would be hurt by my news. But what I encountered today was just grace and understanding, which I needed very much. I guess everybody understands what it's like to want to go home, and I was greeted by so many kind words and wishes today, such a gift to me. As my SPRC chair was announcing the news (brand new in her role, poor woman!), I was thinking: "Hey, I'm holding myself together pretty well. Maybe I'll say a few words myself too." So I got up to speak after she was done, and immediately realized it was a bad move on my part, as a instantly started crying. Ah well. I'm still glad I added my own words from the heart. I've invited my folks here to relocate to CNY with me, but so far no takers.... ;)

So, in July, I will become the pastor at The First United Church of East Syracuse. This congregation is a blended United Methodist and Presbyterian Congregation, a congregation that came together because of a fire that burned the Methodist Church to the ground in the late 60s. Three days after the fire, the two congregation began worshipping together at the Presbyterian Church, and they've never gone back! When a new church home was built in the 1973, it was home to a united congregation. I have some learning ahead of me for sure, as I explore how blended congregations work and brush up on some Presbyterian history and polity, things we might have touched on in Church History in seminary but are sadly now forgotten! In a "small world" situation, Rev. Matt Labriola, a retired pastor here in my congregation in Franklin Lakes, co-officiated a wedding at First United a couple of years ago, so he and his wife have already been to my new appointment and even brought me a bulletin today from there time there. How strange!

Now that I've been through a pastoral transition, I think I have some better ideas about what to expect and a better sense of what I want to and can accomplish here before I go. I'm looking forward to my new appointment, and I'm looking forward to enjoying everything about my next months here in Franklin Lakes.

gavin richardson said…
congrats on the new appointment. i'll miss not having you part of my new jersey conference. &:~(

just don't stop blogging. its all i care about
4:51 PM

rich q said…
Beth,
I'm glad to hear you're returning home, your new church is @ 3 blocks away from your great aunt, Ruth Caterham's house, she lives on Washburn Street. She was married to Jerry Caterham, I believe my mothers youngest brother. Ruth has 4 kids, Susie, Cindy, Peter & ? I'm not sure, but you probably have this is your genealogy records anyway.
Welcome home - dad
7:27 PM